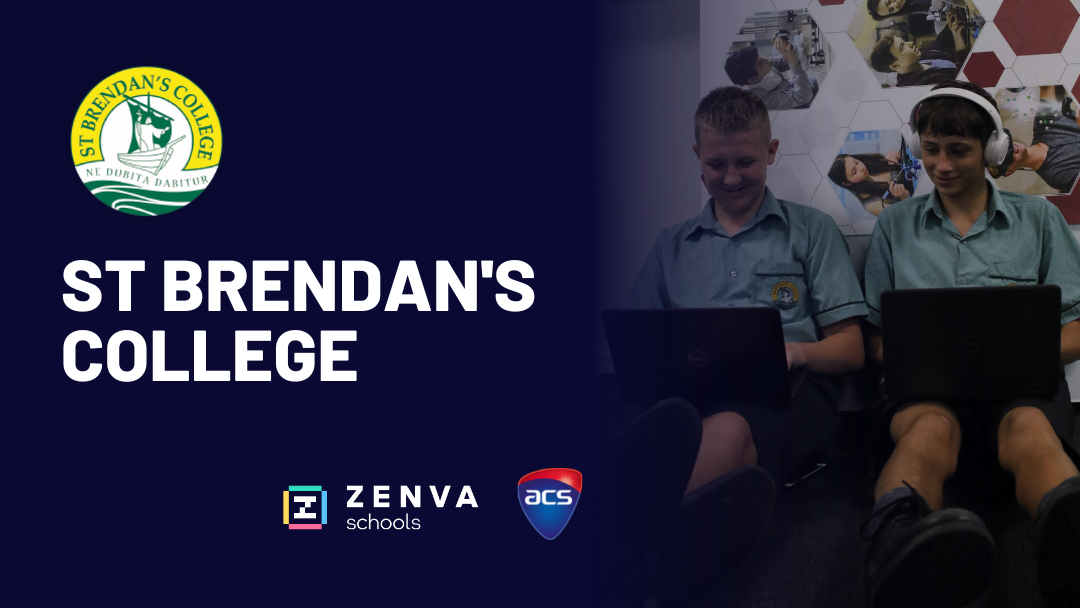 The ICT Gateway to Industry Schools Program supports the next generation of developers by providing them with industry-led professional development. Zenva Schools is a proud partner of this initiative, which is run by the ACS and funded by the Queensland Government through the Department of Employment, Small Business and Training.

As part of this program, we have provided participating schools with access to our platform. One such school was St Brendan’s College – an independent secondary school for boys in Yeppoon, Queensland.

After implementing Zenva Schools, they saw a wide range of positive impacts. It engaged students with fun projects while teaching real-world skills, supported students’ personal learning styles, and allowed students to progress at their own pace while ensuring that no one fell behind.

She used Intro to Game Development with Godot and Godot Project – 2D RPG with her year eight IT class, which was comprised of 29 students. For her year ten class, she used Intro to 3D Modeling with Blender.

Sheridan faced a number of challenges when looking for a platform to support her classes. She needed to manage what content the students had access to, and ensure students could learn skills that were useful beyond just a classroom setting: “I was looking for a way that they could practice their programming skills, where it wasn’t just a discrete skill, and then another discrete skill. I wanted them to be able to apply it in a real-world way.”

She also needed project-based content, to support the semester’s goal of each student creating a game featuring multiple levels, a start page, custom music, and sprites.

For her year eight class, Sheridan took the entire Intro to Game Development with Godot course beforehand, as she was unfamiliar with the engine. However, she was able to successfully assign Godot Project – 2D RPG to her more advanced students without needing to take the course beforehand, and only needed to stay a few lessons ahead of her students with Intro to 3D Modeling with Blender.

As the majority of courses on Zenva Schools are project-based, Sheridan was able to structure the year eight semester around the Intro to Game Development with Godot course, and wrote an exam based on the skills and knowledge that the course covered. Students were given milestones that they had to hit by certain weeks, however, the students were largely able to progress at their own pace. She also ran small breakout tutorials for students who were struggling, while the rest of the class worked individually.

This supported Sheridan’s preferred teaching approach, which heavily features self-directed learning – she acts as the students’ “last port of call for help”, encouraging them to first troubleshoot their own issues.

Zenva Schools also allowed Sheridan to implement multiple modes of learning. She printed out the PDF handouts, bound them, and kept them on her desk. When students got stuck, she used it as a tool to help them troubleshoot the problem: “Sometimes being able to look at the paper copy and then trace it through on their screen was enough for them to go, ‘Oh, I’ve spelled that wrong,’ or, ‘I’ve missed something’.”

She found that some students also minimized the videos, and were able to code along in real-time by simply listening to the audio in the background.

Supporting multiple modes of learning made Zenva Schools an effective tool for Sheridan. “I found that really, really useful, for the kids to be able to personalize the way that they learned. And that’s not something that a lot of the other programs have – the ability to download and print, or listen, or watch the video.”

A key benefit for Sheridan was how Zenva Schools supported students regardless of their abilities, or how fast they worked: “One of the strengths of Zenva Schools is that I can have kids who are way, way ahead, and can give them extra resources and more things to do, and they’re able to keep going on their own. I can also pull out and group kids who are struggling with the same concept, and no one falls behind.”

Zenva Schools also allowed her to effectively support students who had interests beyond the topics covered in class. “One of my boys wants to make a Unity game and put it on Steam. So I’ve just put him in with all the Unity Courses.”

Finally, the reporting features allowed Sheridan to gain quick insights into what stage each student was up to – this allowed her to easily group students, and flag students that needed more regular check-ins, so as to better support every student in her class.

When it comes to advice for other teachers, Sheridan recommends to “do the course yourself first so that when the kids get stuck, you’ve already had a go at troubleshooting and you know some of the issues the kids could have before they get there.”

She also advises teachers to “start small, because if you go too big too quick, too much is happening and it’s too hard to keep track of.”

Additionally, she found that she was easily able to increase engagement with a simple poster: “I made a table, and put the kids’ names down one side, and then goals like ‘I can make the character move’, ‘I can make the character jump’ across the top. I sticker charted it and stuck it up on the wall.” The kids would get excited, coming up to her and saying, “Miss, Miss, I can put another sticker up because I can do this thing.”

Sheridan found Zenva Schools to be a highly effective teaching tool, which met her various needs. “It worked really well – I didn’t expect it to work as well as it did. It was definitely an experiment, but I’ll be using it again in a similar way next year.”

Sheridan also plans on integrating her use of the platform with GitHub, in order to more easily facilitate collaboration between students on projects.

Overall, Zenva Schools resulted in a number of positive outcomes for St Brendan’s College. It supported Sheridan’s personal teaching style, allowed students to progress at their own pace, and the various lesson materials allowed students to personalize how they learned. Individual students could be provided with additional content that matched their interests, and classes learned real-world skills through the creation of complete projects.

Interested in trying Zenva Schools? Get in touch with us here.