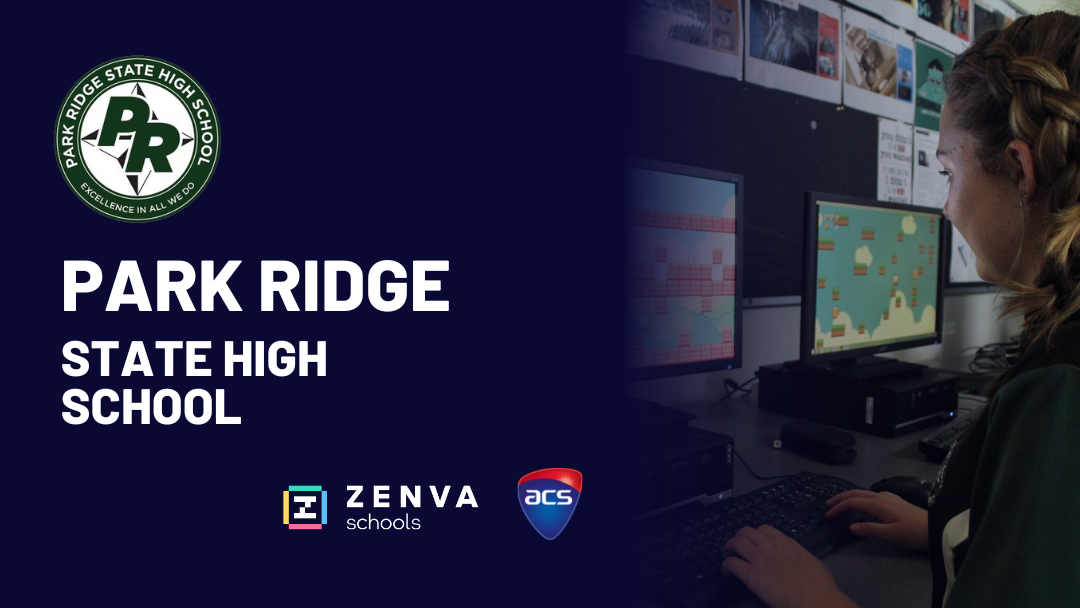 Run by the ACS and funded by the Queensland Government through the Department of Employment, Small Business and Training, the ICT Gateway to Industry Schools Program is designed to support the next generation of developers. As a proud partner of this initiative, we have provided participating schools with access to our platform.

One such school was Park Ridge State High School – a public school in Brisbane, Australia. After implementing Zenva Schools, they saw a wide range of positive impacts, including increased student motivation and engagement, and improved learning outcomes for both lower-level and advanced students.

Daniel Jones, Digital Technologies teacher at Park Ridge State High School, used Zenva Schools with many of the students at his school.

At Park Ridge, all year 7 students must undertake one term of Digital Technologies, with classes rotating through the different terms. Upon introducing Zenva Schools this year, he has used the platform with six separate Year 7 classes, and intends to use it with the remaining two Year 7 classes in the upcoming final school term. As these classes are compulsory, all classes are full, and each is comprised of approximately 28 students.

Primarily, his year 7 students worked through Intro to Coding with Python Turtle and Python Turtle Mini-Projects as a two-week segment at the end of the term. Simpler courses were assigned to lower-performing students, while advanced students were allowed to select their own additional courses to complete.

As a new teacher, Daniel needed easy methods of supporting students who were significantly ahead or behind their peers.

He also needed reliable alternative learning solutions for students that needed additional support, such as those who were unable to attend school on campus.

Daniel was introduced to Zenva Schools by his Head of Department, who requested that he complete some of the professional development offered by Zenva Schools. From the outset, he “definitely liked the look of what was going on with Zenva.” The following day, he set up an account and had a look at the platform, and decided to implement it in his classes.

Coming from a game design background, one thing that really resonated with Daniel was the elements of gamification present in the courses on Zenva Schools. For instance, text-based coding is taught through building real games and apps, quizzes and challenges are used throughout the courses, and students earn certificates for every course that they complete.

Daniel describes how “if you gamify anything, it changes the way psychologically students perceive what they’re doing. So with something like doing a course online, if you even slightly gamify it, they think, ‘Oh, I’m having fun, this is enjoyable. I’m playing a game. This is not work, I’m not learning schoolwork here, I’m playing a game'”.

Daniel built upon this gamification, adding other techniques to further incentivize students to complete the work. For instance, he rewarded students who completed certain tasks with vinyl stickers – something that his year 7 students “went mental for”.

Daniel found that the courses provided high levels of engagement and motivation to his advanced students. He recalled that while teaching his class block-based coding, one of the students was “just leaps and bounds ahead of everyone else in the class”, and asked to learn text-based programming instead. Remembering how “the kids really loved Zenva at the end of term one when I’d done it with them”, he created an account for the student on Zenva Schools, and provided them with access to the Python courses early. Eventually, he let these students choose the next courses that they were to complete themselves.

This motivation extended from the class to their own time – “In the last week of term, that same student and a couple of other students came up and they were like, ‘Hey, are we able to access this from home? Can I do this over the holidays?’ And I said, ‘Yeah, 100%.'”

Zenva Schools wasn’t just helpful for the high achievers. It also made learning digital technologies easy for lower-performing students, and for those with special needs – including students learning from Individual Curriculum Plans (ICPs). Daniel was able to provide these students with simpler content, bridging the gaps between them and their classmates. “Even with the kids on ICPs of year three, they’re not having trouble using Zenva… they are able to get in the course and can engage with that better than what we were doing around the class”.

Another aspect of Zenva Schools that Daniel found incredibly useful was the course and student reporting features – “It’s awesome to be able to track their progress, and what they actually got in the different sections of the modules.”

Having used Zenva Schools with hundreds of students, Daniel is excited to continue using the platform with his students. He loved how the courses are “pretty easy to follow”, and prefers Zenva Schools over the several other competitor platforms that he’s tried.

Daniel found that the courses increased student engagement, allowed him to easily support students of different learning abilities, and motivated students to continue their learning outside of the classroom.

He also plans to extend his use of Zenva Schools to students who needed additional levels of support. He described the difficulty of teaching students who are dealing with issues such as crippling social anxiety, which result in them not attending campus. Instead of marking them on the standard class content, he intends to mark them on Zenva Schools’ content: “I’m going to send them the link to Zenva and say, ‘Hey, here is this program, Zenva. You can do it entirely from home, and I can see when you’ve accessed it, what you’ve done, and I can actually give you a mark, get you to a pass, even though you haven’t come to school.'”

Interested in trying Zenva Schools? Get in touch with us here.